The Magician is the second card of the Major Arcana in Tarot.

All tarot cards appears differs between decks, the uniqueness of the deck reflecting on the cards.

The magician is often seen as a man in robs (or in other extravagent fashion) weilding a wands. The other minor arcana (cup, knife, pentacle) can be seen somewhere in the opicture, usually on a tabel.

The Magician is said to be a card of artistic and innovative endeavors. It indicates power, skill and secrets. When it appears in a tarot spread, it would indicate that the querant (or the person who is recieving the reading) should finish what he or she has started, avoid fooling him or herself and concentrate on one's creative ability to proceed.

If the card is inverted, it may indicate the misuse of power or force, the inability to complete work or bungling of personal or professional circumstances.

According to Arthur Edward Waite, this card signifies the divine motive in man. It is also the unity of the individual being on all planes, and in a very high sense it is thought. With further reference to the "sign of life", i.e. the infinity symbol and its connection with the number 8, it may be remembered that Christian Gnosticism speaks of rebirth in Christ as a change "unto the Ogdoad." The mystic number is termed Jerusalem above, the Land flowing with Milk and Honey, the Holy Spirit and the Land of the Lord. According to Martinism, 8 is the number of Christ.

In other traditions this card can refer to scholarly knowledge. The Fool (card 0) has learned something about the workings of the world and now sees himself as powerful. Perhaps the reputation of the Magician is derived from the Fool misunderstanding what is happening while the High Priestess (the next card) is looking back, thinking that the Magician is missing the point of spiritual knowledge. 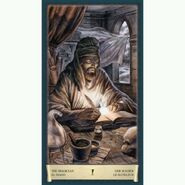 The Magician (Dark Grimoire Tarot)
Add a photo to this gallery
Retrieved from "https://spellencyclopedia.fandom.com/wiki/The_Magician_(Tarot)?oldid=5131"
Community content is available under CC-BY-SA unless otherwise noted.